For NeurIPS 2022, we are hosting the Object Rearrangement challenge in the Habitat simulator 1. Object rearrangement focuses on mobile manipulation, low-level control, and task planning.

For details on how to participate, submit and train agents refer to github.com/facebookresearch/habitat-challenge/tree/rearrangement-challenge-2022 repository.

In the object rearrangement task, a Fetch robot is randomly spawned in an unseen environment and asked to rearrange a list of objects from initial to desired positions – picking/placing objects from receptacles (counter, sink, sofa, table) and opening/closing containers (drawers, fridges) as necessary. The task is communicated to the robot using the GeometricGoal specification, which provides the initial 3D center-of-mass position of each target object to be rearranged along with the desired 3D center-of-mass position for that object. An episode is successful if all target objects are within 15cm of their desired positions (without considering orientation).

The Fetch robot is equipped with an egocentric 256x256 90-degree FoV RGBD camera on the robot head. The agent also has access to idealized base-egomotion giving the relative displacement and angle of the base since the start of the episode. Additionally, the robot has proprioceptive joint sensing providing access to the current robot joint angles.

There are two tracks in the Habitat Rearrangement Challenge.

For both tracks, there are the following dataset splits. All datasets use scenes from the ReplicaCAD dataset 1. Objects are from YCB 2, and the same object types are present in all datasets.

We first describe the Fetch robot’s sensors and the information provided from these sensors as inputs to your policy in the challenge. Next, we describe the action space of the robot and the values your policy should output.

Agent Observations: The Fetch robot is equipped with an RGBD camera on the head, joint proprioceptive sensing, and egomotion. The task is specified as the starting position of the object and the goal position relative to the robot start in the scene. From these sensors, the task provides the following inputs:

Outputs: The robot can control its base and arm to interact with the world. The robot grasps objects through a suction gripper. If the tip of the suction gripper is in contact with an object, and the suction is engaged, the object will stick to the end of the gripper. The suction is capable of grasping any object in the scene and holding onto the handles of receptacles for opening or closing them.

The primary evaluation criteria is the Overall Success. We also include additional metrics to diagnose agent efficiency and partial progress.

The episode will terminate with failure if the agent accumulates more than 100kN of force throughout the episode or 10kN of instantaneous force.

Participate in the contest by registering on the EvalAI challenge page [Coming Soon!] and creating a team. Participants will upload docker containers with their agents that are evaluated on an AWS GPU-enabled instance. Before pushing the submissions for remote evaluation, participants should test the submission docker locally to make sure it is working. Instructions for training, local evaluation, and online submission are provided below.

The challenge consists of the following phases:

The plots below visualize the distance between the starting object position and the goal position for each of the datasets in terms of meters. 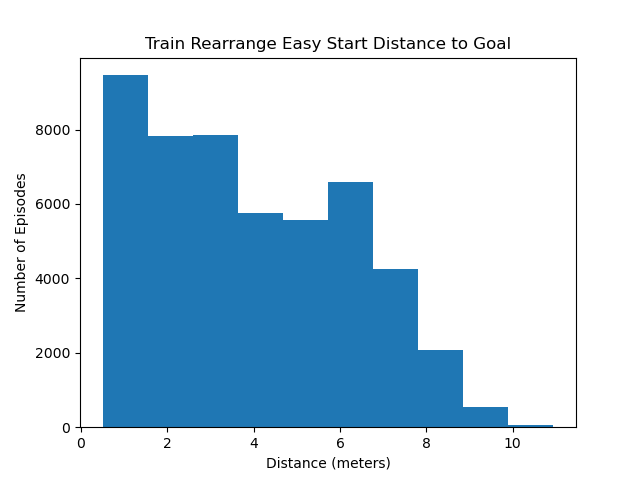 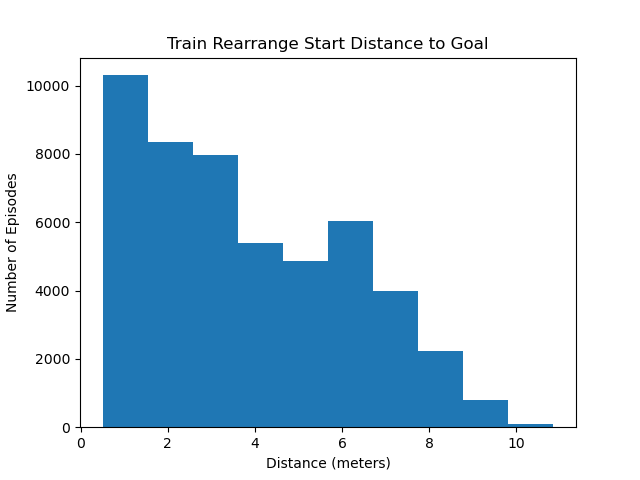 The Habitat challenge would not have been possible without the infrastructure and support of EvalAI team.

For details on how to participate, submit , and train agents, refer to github.com/facebookresearch/habitat-challenge/tree/rearrangement-challenge-2022 repository.

Please note that the latest submission to the test-challenge split will be used for final evaluation.

For updates on the competition, join the rearrange-challenge-neurips2022 Habitat Slack channel (available under Contact).